Father of a Future Governor of New York 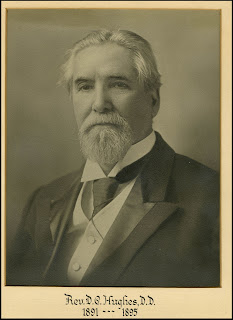 The Reverend Dr. David Charles Hughes was born on June 24, 1832 and died on December 15, 1909. He was a reverend in Scranton in the early 1890's and served on the Scranton Public Library Board of Directors, but he was also known as a father of a very important and well-known man in politics.  D.C Hughes had one child; Charles Evans Hughes who served as a Governor of New York from 1906-1910. D.C Hughes actually passed away in the Governor's Mansion while his son was governor of New York, according to an article published in the New York Times on December 16, 1909. 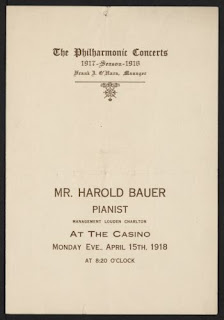 Scranton is famous for its Vaudeville venues, but high-brow entertainment had its place as well. The "From Lace Makers to Coal Miners" collection contains a program from a Philharmonic Concert given on April 15, 1918 at The Casino (337 Adams Ave.). Mr. Harold Bauer is the pianist and the pieces he plays are not suprising; Beethoven's Sonata in C Major, plenty of Schumann, some Chopin and Liszt. There is an interesting mystery surrounding this artifact. There are nearly illegible words hand-written at the bottom of the third page. One appears to "Brahms." Why would someone write Brahams on a program for a show that supposedly contained no works by Brahms? Wishful thinking? A review in the April 16, 1918 Scranton Times reveals the answer: "For a final encore, Mr. Bauer played a Brahms waltz with a touch at once...caressing and delicate..."
Posted by Lackawanna Valley Digital Archives at 7:48 AM No comments:

Who is this person? 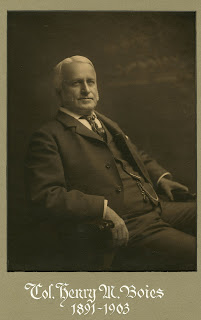 I'm sure that everyone has found a photo or two, three, four, or many more and wondered "Who is this person?" These pictures are usually really old photos of men, women and children sitting in chairs or standing in a group pose with barely a smile.  Some of the people look very stiff, while others look extremely confident.  Colonel Henry Martyn Boies pictured above is an example of an extremely confident man whose picture can be found in the Lackawanna Valley Digital Archives.

According to Col. Henry Boies (1837-1903) biography in The Wyoming and Lackawanna Valleys, Boies lived a very illustrious life.  His bio is five pages filled with information about his successful business career. Among some of his highlights is being an incorporator of the Third National Bank of Scranton. He also served as the director of this institution for 10 years. Boies was successful in organizing and starting many businesses and invented and had patents as well. In 1878 he became a Colonel in the Pennsylvania National Guards Thirteenth Regiment. Boies was also a member and President of the Scranton Board of Trade. Last, but not least he was a member of the Albright Memorial Library board of directors.

Posted by Martina at 2:39 PM No comments:

Introducing from "From Lace Makers to Coal Miners"

We would like to introduce our newest collecton, "From Lacemakers to Coal Miners: Life in the Lackawanna Valley 1866-1920." Funded by a grant from the Lackawanna Heritage Valley Authority, this collection features 41 tems from the library's own collection including a 1917-1918 program from the Scranton Philharmonic, a 1914 study on charity organizations in Scranton, and a book about the products of the Scranton Lace Company. For more information, see the article in Go Lackawanna or just enter the archives.
Posted by Lackawanna Valley Digital Archives at 9:29 AM No comments:

Welcome to Our New Blog