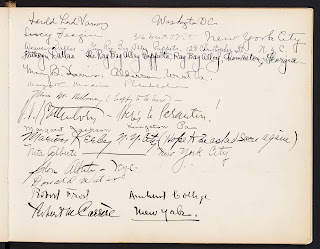 The Scranton Public Library and LackawannaValley Digital Archives is happy to announce a new collection; The Century Club of Scranton!

The Century Club of Scranton was founded in 1911 when four women’s organizations merged together.  The Century Club at one time had 400 members who were highly involved in social reforms throughout the city.  In 1914, William Walker Scranton purchased and built the clubhouse at 612 Jefferson Avenue where the Century Club has remained for over 100 years.  The building is on the National Register of Historic Places.
This collection features over 400 items including a guest book, bulletins, and scrapbooks.  Robert Frost, Louis Horst, Martha Graham, Langston Hughes, and Carl Sandberg are among just a few of the internationally known poets, singers, dancers and composers who were invited to perform at the Century Club.  These names can be found in the guest book.  The bulletins were written from October to May and contain articles about events, speakers and performers and the scrapbooks contain newspaper clippings, events programs and photos through the years.  This collection was funded by a grant from the Willary Foundation.

About the Lackawanna Valley Digital Archives:
The Lackawanna Valley Digital Archives was developed by the Scranton Public Library thanks to a generous grant from the Willary Foundation. Its primary mission is to make the history of the Lackawanna Valley and surrounding areas accessible to anyone with a computer and Internet connection. The LVDA is divided into collections based on time periods or themes and contains high quality images of books, photographs, printings, letters, maps, videos, and other artifacts. Items have been collected from a number of organizations and individuals and can be viewed with great detail and clarity. New collections will debut on a regular basis.