The History of the Scranton Public Library collection in the Lackawanna Valley Digital Archives contains this photo of a the library's main Circulation Desk. It is undated, but we believe it dates from the first half of the 20th Century. Unlike today this area was enclosed and separated from the foyer and the rest of the Main Floor by two glass paritions. Obviously, there are no computers in this photo. Everything was manual. The window facing the camera was removed in the early 1990s to install a handicapped access door and ramp. The ramp is currently being replaced by an elevator which, for the first time in the library's history, will give patrons with limited mobility access to the 2nd Floor Reference and Periodical Rooms. 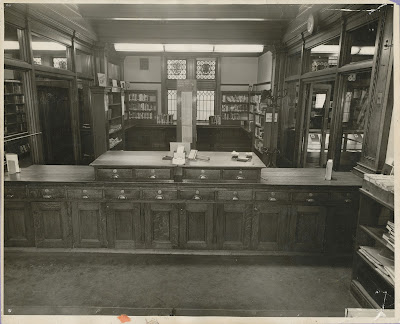 Posted by Scranton Public Library at 1:48 PM No comments: 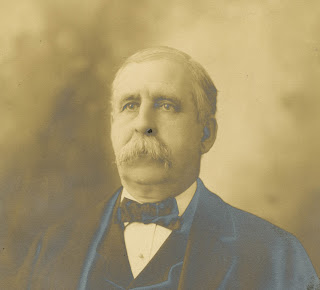 The photo above is the image of James Archbald the 5th. Please disregard the spot on his nose as a jokester filled in his nostril.

James Archbald was named after his father James Archbald the 4th and he and his father were known as the developers of the coal companies and railroads; the Delaware & Hudson and the Delaware, Lackawanna, & Western.  According to the History of Scranton by Frederick Hitchcock the Archbald's ran these companies for over 70 years.

The James pictured above served in the Civil War in Company I, 132nd Pennsylvania Volunteers. He was a captain that fought at the Battle of South Mountain, and Antietam.  On January 25, 1865 he married Maria H. Albright and they had six children.  James Archbald died on October 4, 1910 in Venice Italy while on a 3 month vacation with his wife.

-More information about James Archbald can be found in the History of Scranton by Frederick Hitchcock starting on page 660.
Posted by Martina at 12:07 PM No comments:

The latest issue of Go Lackawanna contains a story on the Hurricane Diane collection which is currently in development. You can see the article here or at your nearest newstand.
Posted by Scranton Public Library at 10:50 AM No comments:

The above receipt is one of the wonderful items found in the Out of the Wilderness collection on the Lackawanna Valley Digital Archives.  This is a receipt for burial expenses for a Z.W Knight in Waverly Pennsylvania on February 8, 1962.  Charles Carpenter paid $8.50 for the coffin and attendance at the funeral for Mr. Knight.  All I can say is "Wow!" This could have been a fortune to someone in 1862.
Posted by Martina at 6:31 PM No comments: